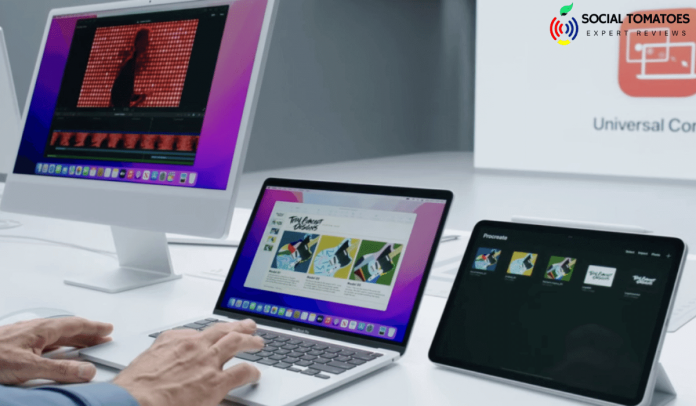 Apple has recently come up with some of its best software gimmicks. Universal Control is a superb example of what can achieve when a firm has total control over both hardware and software.

The Logitech Flow system and other comparable ideas are available, but nothing quite matches Universal Control’s degree of polish and integration into the operating system as it is.

Connect your Mac and iPad to the same network to share an Apple universal control ID. Wi-Fi, Bluetooth, and Handoff must enable on both devices and the devices must be within 30 feet of each other. With Universal Control, you may control up to three devices simultaneously.

What Is Universal Control?

Universal Control is essentially Apple’s effort to elevate the current Handoff experience to a higher degree of refinement and sophistication. Handoff already allows you to unlock your Mac with your Apple Watch, run iPhone applications on your Mac, scan documents with your iPhone camera and utilize them immediately on your Mac, and the list goes on.

As long as your iPad and Mac are both equipped with Universal Control, you will be able to utilize the same Macbook cursor and keyboard on a nearby iPad. The iPad can connect with a Mac using Mac’s keyboard and mouse. What’s more, there’s more. You may also effortlessly move files across devices by dragging and dropping them.

Universal Control aims to connect the iPad and the Mac. The installation of Universal Control for iPad and Mac is completed after the system requirements have been met, as shown below. Let’s speak about the qualifications while we’re on the subject.

Universal Control Is Not Sidecar:

In some ways, Universal Control reminds me of the old Sidecar function, which allowed you to use your iPad as a wireless (or cable) second screen for your Mac computer.

By connecting your iPad to your computer, you may utilize it as an external mac OS display. On the iPad, none of the software programs are really in use at the time.

With Universal Control, each device runs independently, running its software and communicating with the other devices. Because the iPad screen is larger, the keyboard and mouse inputs are routed to the iPad rather than to the mac OS.

Universal Control may think of as a software-based KVM switch in this context. KVM switches are used to link several computers to a single set of peripherals, allowing a single user to effortlessly operate all of the machines connected to the same peripherals.

But Universal Control can do much more. It also supports dragging and dropping between Mac and iPad. It is simple to move stuff across devices when the two applications in question are compatible and support the capability.

The content is then sent between devices via AirDrop technology. In the same way, you may copy and paste material between the Mac and iPad as if they were two separate computer systems.

The Benefits Of Universal Control:

Mac users who wanted to travel with a portable dual-monitor system found Sidecar to be a very handy feature.

An iPad Pro with an iPad Air connected to it allowed me to easily switch between two different applications on the same screen, such as word processing and a web browser or PDF document. When shown on a single 13-inch screen, it seems to be quite a squeeze!

The disadvantage of using this strategy is that it wastes the iPad’s processing power and places all of the pressure on your Mac computer instead.

In the case of Universal Control, your iPad may take care of your web browser, music streaming program, and anything else you choose to run on it, while the Mac takes care of your productivity software and heavier applications such as video editors.

It also implies that you may quickly transfer data between mobile applications and your iOS universal control without buying a Mac OS version of the software, assuming one is even available.

Setting Up Universal Control On Mac:

After the installation of the relevant version of mac OS Monterey, the following steps must complete to enable Universal Control:

1. Select the Apple symbol located in the upper left corner of the device.

2. From the pull-down menu, choose System Preferences from the list.

Your Mac is now fully functional as a Universal Control Mac.

Setting Up Universal Control On Ipad:

Following the installation of an iPad OS 15 that is compatible with your tablet, it is time to configure universal TV remote control on your device:

2. Select General from the left-hand menu.

3. Toggle between the cursor and the keyboard.

With the release of iPad 2.0, you may now utilize Universal Control.

Moving the pointer against the side of your Mac’s screen will be helpful when you first start navigating between neighboring devices, as described above. In this case, an animation showing that the pointer may move from one device to another should be shown on-screen.

Once you’ve done that, everything should go smoothly, and you’ll be able to freely move the mouse between the two displays, with keyboard input being immediately assigned to whatever device the cursor is presently on.

You can then enter into text input areas in applications like Notes or Safari using a single keyboard, thereby enabling you to utilize a single set of peripherals with all of your Apple devices.

You may also drag and drop files across devices, but remember that if you’re using an iPad and a Mac, you’ll need an app open that supports the file type you’re moving. First, use the Photos app on your iPad to transfer an image from your Mac. Otherwise, utilize your iPad’s Files app to send a file.

Because Mac’s desktop supports several file formats, dragging files from the iPad to the Mac is much easier. Because the Magic Keyboard is capable of supporting these functionalities, macOS motions like the three-finger swipe between pages are also compatible with the iPad.

Be aware that certain multitouch gestures, like those used for Mission Control, are not accessible on an iPad, and that others are somewhat different.

If you launch an app on the iPad and then wish to close it using Mac’s trackpad, you may do it with a three-finger swipe. You may also use a mouse to drag up the dock and toggle between apps.

You may copy and paste material from one device to another using one keyboard, however, this capability seems to be broken in programs like Safari. During the beta testing phase, it is probable that certain features, such as copy and paste, maybe refined.

By working across all of the best iPad and finest Mac models, Universal Control enables you to work in a whole new manner across platforms, while also getting the most out of both macOS and iPad OS applications and experiences.

How Does Universal Control Work?

Macs and iPads may control using a single mouse, keyboard, and trackpad. You may move the pointer and keyboard effortlessly between the devices, and iCloud infers the device’s location based on the activity of the cursor and keyboard.

Is It Possible To Utilize Universal Control On Numerous Macs?

Yes. It is possible to utilize Universal Control with two or more Macs but not with an iPad; nonetheless, at least one Mac is necessary for usage on the iPad.

You can read more blogs like this
Why to buy Apple Mac Mini? | Review
A Complete Guide To Freeing Up Macbook’s Drive Space
Best Screen Mirroring Devices