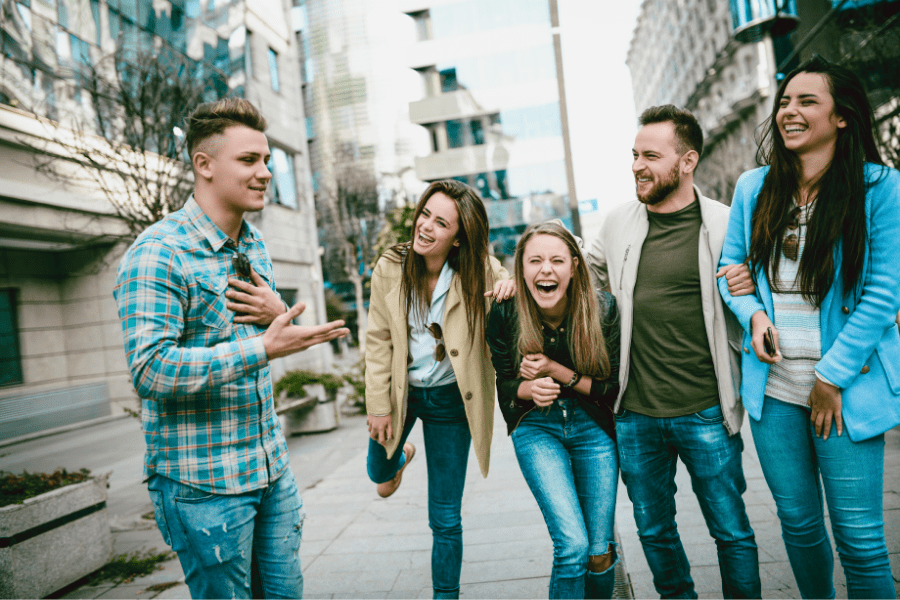 Want to learn how to make jokes? This article teaches you how to get your friends and family rolling in the aisles.

Making someone laugh is one of the best feelings in the world. Laughter helps us connect with others, build rapport and trust, reduce stress, and overlook differences. It’s hard to be mad at someone you’re laughing with. If making people laugh is something you’ve always wished you could do, you’re in luck because being funny is something you can learn!

Creating humor is about playing with words and their meanings, and the very careful placement of just the right word in just the right spot. To make someone laugh you need to think outside the box and end your thought in a surprising way. It’s twisting a thought in an unexpected direction to create a totally new, different, unexpected meaning. Check out our ten ways to create a funny line!

How to make Joke

All humor is based on surprise. It’s leading a thought one way then – snap – you flip it in a different direction. It’s the quick twist at the end that surprises us and makes us laugh. Here are examples of jokes that end in a way we’re not expecting:

Notice how the first half of these jokes seem to be talking about one thing and then veer off in a different direction. It’s the quick twist that catches us off guard and makes us laugh.

Another technique is comparing things that don’t belong together. When we see a similarity between two totally different things, we’re surprised and we laugh. Here are examples:

The first joke compares the size of a spider to a cheeseburger. The second compares the taste of cake to a forest. The third compares the feeling of being on a roller coaster to eating beans – all associations we probably weren’t expecting.

Exaggerate to the Point of Ridiculousness

Another way to create humor is by exaggerating something to the point of ridiculousness. Stretch one of its features to call attention to that aspect of it, like this guy’s muscles above.

Here are examples that use exaggeration:

When exaggerating, stretch the truth to the point that it’s funny, but not to where it’s totally outrageous and hard to imagine.

Another way to create a funny line is to use very specific details. Describe something using fresh, unusual description so your listener feels, smells, hears or visualizes the person, place, or thing in a whole new light, like this girl who describes her hair as curling up like Cheetos – a very specific image above.

To create a funny line using original details, start with an ordinary sentence like “My shoes smell bad”. Then turn it into something funny by using off-center specifics. Brainstorm unusual smells, sounds, and feels and work the sentence like a puzzle. Keep trying different endings until you come up with something that works, like these:

Be Literal When It’s Not Expected

Another technique is to be unexpectedly literal. Being literal is ignoring what someone means, and instead focusing on their exact words. This creates surprise because, again, it’s a response that’s not expected. Here are examples:

In all of these jokes, the meaning in the first part is ignored and the response focuses on the actual words.

Another technique is to get well-known facts wrong in an obvious way. Twist simple facts into something different to create a new, off-center thought. The girl above read a recipe that said, When the cookies are done, chill in the fridge for an hour. Do you think she got the instructions wrong?

Here are examples of getting facts wrong:

Set up a joke so your listener assumes some of the details, then break that assumption. In the joke below, the speaker lists the martial arts they know. We assume they’re experienced in practicing these arts, but that assumption is shattered when we realize they only know the names.

Here are other examples:

In all of these jokes a key piece of information is missing. Most listeners will assume what you mean and then are surprised when you fill in the blank in an unexpected way.

Start with a common saying, catchphrase, motto, or slogan and twist it into something new. For example, start with something like “That is so last year” and change it to “That is so 30 minutes ago” or “That is so back in kindergarten.” Here are examples of other twisted catchphrases:

Refer to Famous People and Things

Refer to famous people, places, and things in an unusual way. This lets you associate your thought with something we all know and turn it into something new. Like if I say, “Sure thing, Einstein,” you know I mean, “Sure thing, smart guy.” Here are other examples:

Another great way to make someone laugh is to create a pun, which is a play on words. Puns play with words’ double meanings, similar sounds, spellings, or contrasts. In the examples below, the word in bold is the one that’s “played with”.

Conclusion How to make Jokes

Try out these techniques for yourself, practice them, and create your own jokes! These ten methods will surely help you sharpen your funny bone! Though these techniques are a great foundation to make jokes, to truly be funny, you need to be yourself. We’re funniest when we’re relaxed, sitting around with friends, goofing off.

I’d like to close with one of my favorite jokes.

What do you call cheese that’s not yours?
Nacho cheese.

Sorry if that was cheesy, I just wanted to make you laugh! Now post one of your favorite jokes in the Comments below and keep the laughter going!